It is an iconic image from, the City of Münster, taken in 1991, to show the space required to transport 72 people. It has been copied many times and we want to recreate it for Glasgow, so need your help.

We were inspired by Metro Houston, who tweeted their version during the week.

Hate traffic? Here’s something to think about. Cars take up a lot of space and often they’re carrying only one person. -M pic.twitter.com/pSbcILH68z

Like a solar eclipse, this aligned with this Sunday, 27th August 2017, seeing the HSBC City Ride come to Glasgow.  As part of this a number of the city centre roads are to be closed.  Including Ingram Street, in front of the Gallery of modern Art (GoMA).  What could be a better back drop for a Glasgow version. 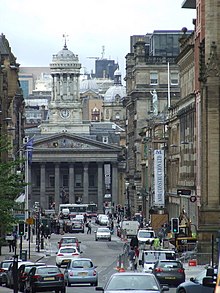 So if you are in town on Sunday for the HSBC City Ride, or you are just out and about on your bike, pop along to GoMA at 10:15 to take part in How Much Space! the Glasgow addition.

We campaign for better infrastructure, policy, and political support for cycling to be a safe, efficient, clean and healthy mode of active travel for everyone.

Please join us to help us make our campaign voice louder.

To become a member please visit the Go Bike Membership page. If you are an existing member you can also update your membership details if required

If you want something changed tell your elected representatives. If they don't fix it complain.